Trailhead:
You can start at either end: the center of Genoa or from Walley’s Hot Springs Resort.

The Ride:
A fun relaxing historic ride for the entire family along the western side of Carson Valley overlooking the lush grazing fields as the region’s earliest pioneers did. This ride parallels the original Overland Emigrant Trail. Bring an appetite as this ride offers a great combination of early western history, food and beverages, a park, great views and a hot spring spa. What more could you ask for.

Historical:
Genoa is the first town settled in the State of Nevada in 1789, but before that it was settled by John Reese and his party (Mormons) to set up a trading post in what was then the most western of the Utah Territory in 1851. It was the first permanent settlement in the Utah Territory. In 1855, Orson Hyde, a Mormon Church elder from Salt Lake, was tasked with setting up a government, Mormon Station Genoa, and defining a state line between California and Utah Territory. It’s believed the name Genoa came from Hyde’s admiration for Christopher Columbus and his birth place in Genoa, Italy. The station prospered as the Overland Emigrant Trail passed through its current main street. Today there are several historical buildings: Genoa Bar, Masonic Hall, Courthouse Museum, Community Church (1890), Pink House (1856), Kinsey House (1855), A. C. Pratt House (1872), and the Mormon Station State Historic Park. At the Mormon Station is also a statue honoring Snowshoe Thompson. A man who carried mail to and from Virginia City over the Sierra’s during the winter months by foot and 10 foot long skis.

On the other end of the ride is Walley’s Hot Springs Resort, founded in 1862 by David and Harriet Walley. It’s a natural hot spring along a fault break. Initially a spa with 11 baths, ballroom and gardens, Walley’s became a popular resting place as the thermal waters (136’-160’F) were a well known cure for Rheumatism and Scrofulous affections. It sold for $5,000 in 1896, but functioned as a hotel until 1935 when it burned. Its former cool cellar is still in use. Today, it’s a popular spa and resort. 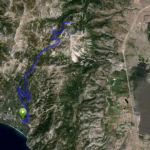 Mt Rose Out & Back Ride Details 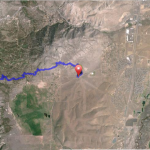 Clear Creek Out & Back Ride Details