Electric powered vehicles are a top-of-mind topic today among industries, governmental agencies and consumers; and electric bicycles or e-bikes are no exception. It is useful to know before you go riding on an e-bike about their various types, capabilities and laws regarding their use.

The state of California is leading the way by defining electric bicycle types with classifications in their Vehicle Code passed into law and effective January 2016. The current regulations define an “electric bicycle” as a bicycle equipped with fully operable pedals and an electric motor of less than 750 watts (1.01 hp), and separated into three classes: 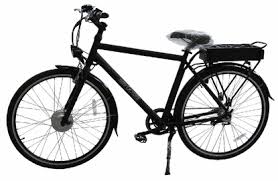 Under the California law, Class 1 and 2 e-bikes are allowed on off-street multi-use paths, while Class 3 is restricted to roads and on-street bike lanes. Helmets are mandatory for Class 3, but license plates are not required. E-bikes must have permanently affix labels indicating Class 1, 2 or 3. The law does not prevent local authorities from further restricting e-bike use if necessary and only applies to roads and bike paths governed under state and federal vehicle code. The rules for e-bikes on public roads, sidewalks, and pathways are under state jurisdiction and may vary by state.

This law does not address riding on native surface paths in parks and open spaces – like mountain bike trails. 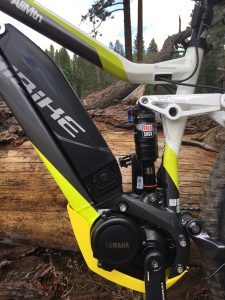 In the Tahoe basin, one place where E-Bikes are allowed is Lake Tahoe Nevada State Park.  The Spooner Lake Backcountry contains 50 miles of trails, and all of those that are open to bikes are open to E-Bikes.  The most popular ride is the spectacular 14-mile Marlette Flume trail.  A shuttle runs from the Tunnel Creek Cafe to the Spooner Lake entrance of the park for those that want an easier alternative to riding back uphill to Spooner Lake.

Clearly, electric bikes or e-bikes offer increased potential for low-cost transportation and quality recreation experiences that can connect people with their National Forests. However, as bicyclists and those new to the activity, we need to know about the laws and the appropriate places to ride for reasons of safety and compliance with existing laws.

It is highly probable electric bicycles or e-bikes are here to stay and will continue to evolve technologically and grow in use. The future of both is uncertain. Therefore, it is important that we have patience with that evolution and comply with existing laws as jurisdictions monitor and learn more about the technology and the public’s needs and interests. Overtime, the jurisdictions can make appropriate adjustments to their laws, “if and as needed, in the future.”