Challenge:
Flat and depends on your fitness level and distance traveled.

Trailhead:
Located at the corner of Lake Tahoe Blvd. and Viking Way (entrance to South Tahoe High School) or you can begin from Meyers.

The Ride:
The El Dorado connects the City of South Lake Tahoe to El Dorado County’s Meyers area with a separated bike path network paralleling the roadways of Lake Tahoe Blvd., Sawmill Road, and Hwy 50. The ride consists of three connected bike paths of which you can select either one of the three as an Out & Back or ride the entire El Dorado. There are several recreational opportunities along the ride: Mountain Biking trailhead (Tahoe Mountain Loop), Fishing (Sawmill Pond, Upper Truckee River, and Paradise Resort Park), River Rafting (Upper Truckee River), Golfing at two courses, a Bike Shop, and a riverside park at the end of this ride (Paradise Resort Park). On either end of the ride you will find options for food, beverages, markets, shopping and bike shops.

Historical:
In Meyers, at Lira’s Market, was the site of the former Yank’s Station Toll House, California’ easternmost remount station for the Pony Express Station before heading over Hawley Grade (a National Historic Trail) from 4/3/1860 to 11/17/1860. It was also a trading post, hotel and stage stop. On 11/1860 the new toll road Johnson Pass (now a paved short cut to Echo Lakes) over Echo Summit was opened. Today’s Old Meyers Grade was built by David D. Kingsbury and John McDonald and was open to wagons on 2/5/1861. This route later became the Lincoln Highway 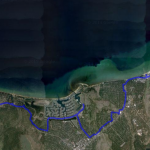 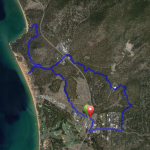