The Ride:
Pioneer Trail Road Bike Ride Out & Back: This is a popular across town ride with lower traffic volumes and bike lanes all the way from Stateline to Meyers. You can connect to Pioneer Trail from many locations and create your own out and back ride.

Historical:
This route is part of the original California Trail and later became part of the Lincoln Hwy that provided pioneers and first motorists a route to cross Echo Summit on their way to the gold fields and San Francisco respectively. In Meyers, at Lira’s Market, is the original site of Yank’s Station Toll House, named after Ephrain “Yank” Clement, and California’ easternmost remount station for the Pony Express heading to Placerville. He sold it George Meyers in 1873 and C.G. Celio & Sons acquired it 1903. It was destroyed in Nov. 25, 1938 by the Meyers fire. (For more history, visit the El Dorado ride.) 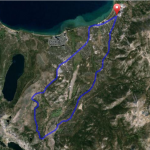 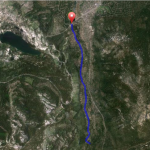