Carson – Kirkwood Out & Back Ride Details

Challenge:
Continuous climb and fast descent on irregular paved surface. Caution is needed for high speed traffic and little to no shoulders on the road.

Trailhead:
There is a parking area with restrooms just a couple of hundred yards to the right on Hwy 88.

The Ride:
This is a beautiful ride through Hope Valley to Kirkwood Mountain Resort, particularly in the fall when the Aspen trees are brilliantly gold and yellow. The ride is one of the legs of the annual Death Ride: Tour de California Alps that occurs in July. Once you pass Blue Lakes Rd. you will begin a steady climb, passing Red Lake, and up to the summit at 8,574’. Continuing westbound you will descend and a spectacular vista opens up with Caples Lake before you and majestic Round Top (10,381’) and The Sisters peaks (10,153’, 10,045’) are on your left – the California Alps. After crossing the second dam, a new Sierra mountain landscape opens up – a U-shaped valley, framed by mountains, called Kirkwood Meadows – the home of Kirkwood Mountain Resort. Ride into the resort and check out their summer activities. Be cautious on your return descent due to traffic and irregular road surface conditions. There are no shoulders on the road.

Historical:
Carson Pass was named after Kit Carson, the scout and guide for John C. Fremont an Army officer commissioned to explore and map the western states in 1844. On February 2, 1844 Fremont and Carson were the first Euro-Americans to spot and record their sighting of Lake Tahoe from high above Red Lake Peak. They entered Alta California, then a province of Mexico, and was ordered to leave by the Mexican Government. It was believed President Polk wanted Alta California for the U.S. Upon their return over the Sierras, they forged a new route, between Sacramento and Genoa, and Fremont named it after his scout, Carson. Carson Pass was part of the Emigrant Trail.

In 1849, Dr. James Caples passed through this area on his way to the Gold Country. After a brief stay in old Hangtown (Placerville), Caples remembered this lake and returned there with his family to establish a way station that served weary travelers for 30 years. Later, a Mormon Battalion in 1852 was seeking a new route from Placerville to return to their station in Genoa and it became an important freight route for transporting supplies for the mining operations on both sides of the Sierras. That trail is now a paved road, Mormon Emigrant Trail, connecting Carson Pass (Hwy 88) with U.S. 50 near Placerville. It passes by Jenkinson Lake and can be used as an alternate route during the summer as it is closed during the winter months. 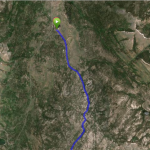 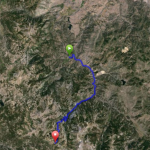